How to travel abroad with kids

Home / Travel / How to travel abroad with kids 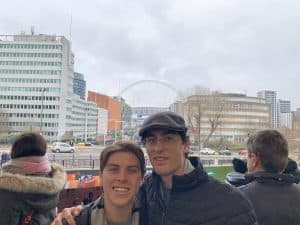 Charlie and Jack at the UK football game.

If you follow me online, you know that my family recently got back from an epic trip to the UK, France and Spain. All six of us packed up and spent most of the kids’ winter vacation there, something we’d been looking forward to for a long time.

We’ve done some travel as a family before, but with the kids getting older there were new things to consider–their freedom to explore for one. And their ability to make some decisions about what we saw for another.

Here’s how we opted to travel abroad with kids this holiday season. All in all, it was an amazing trip and went smoother than we could have asked!

What sights will you see? What transportation will you use? Make sure that everyone knows the itinerary while you’re away so they know what to expect. This helps calm nerves of those who crave routine and allows everyone to manage their own wardrobe. If your children are old enough, talk to them ahead of time and allow them to choose some of the sights you’ll see.

I loved that my kids had learned about things like the Louvre, Buckingham Palace and other sights in school. And they were able to make decisions about some of the other things they got to do while we were away. For example, the boys got to watch a football (American soccer) game when we were in England. It was the highlight of their trip. 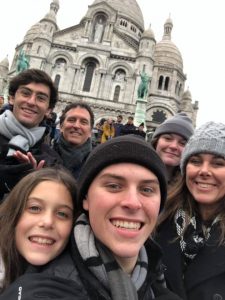 Before you travel, know in advance what you will and won’t allow your kids to do abroad. This could involve something as big as going off on their own or as small as visiting a certain landmark. Not everyone you or they want to do will be possible if your time is limited and it’s also necessary to maintain some boundaries on what’s allowed and what’s not.

We allowed our three oldest to walk around on their own for a bit while we were in England. The boys look older and we knew Lucy would be safe with them. Plus, since we knew the language and they had a phone with them, we felt comfortable doing that. I’m not sure we would have allowed to do that elsewhere. On the other hand, I had to put my foot down when the kids wanted to stay at the Champs-Elysées until midnight on New Year’s Eve. Jeff and I weren’t feeling it and we opted to have everyone back at the hotel together that night.

Stock Up on Snacks

This seems like a no-brainer, but we had challenges come up that we didn’t expect. Prior to the trip, I stocked up on snacks for the long trip there. The kids were responsible for packing all the snacks they wanted in their own carry-ons. While everyone was happy while traveling and the first day of the trip, the snacks were soon gone.

Jeff and I, along with the older kids, were fine but it’s harder for younger kids to keep up. Younger children won’t eat as much at meals, but their fast metabolism means they’ll be hungry sooner. We ended up searching out a market and letting Molly choose some additional snacks she could have while sightseeing.

Not every country is a good pick for every family. It’s important to choose a location that is a good fit for you and the age of your children. Just like Las Vegas isn’t a typical family-friendly destination, neither are some of the war-torn areas of the world. And with young children, it’s often easier to travel somewhere where you know the language (or they speak yours). Food is another consideration, especially if kids are picky eaters.

We didn’t have any challenges with language in England or Paris; fewer people spoke English in Spain, but thankfully I speak fluent Spanish. It was interesting for the kids to experience the culture where we went, but the kids tended to gravitate toward the more Americanized foods like pizza and burgers.

I think showing kids the world is such an important part of growing up. Seeing the world outside their own little bubble is vital to learning empathy for others and to see how others live. I’m grateful that we have the means to do this; I know not everyone does. That said, this was an experience that we wanted to share before Jack goes off to college next fall. I don’t know when we’ll be able to do something like this again! 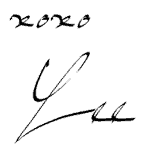